Getting started with the Mix 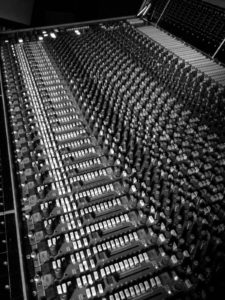 Getting down to separating the different elements, and piecing it all together can be a fun experience, or a nightmare if you have no idea where to start. Many engineers have their own way, but in general, labeling and organizing your tracks is a good idea, and while there is no perfect or proper way to do any mix, keeping things organized and making the creative process as deliberate as possible, can be an intuitive way to draw upon your skills as a listener or musician. While we spend much of our time listing back to takes, and determining which performance is best, we allow musicians to deploy their greatest creative freedoms in ways that defines them as players. If you have any questions when you’re going through the process, feel free to ask, and it will soon become an intuitive process as we begin working with EQ and Compressors to further refine the sound. Once the tracks has been tweaked, we produce mixes of each song for you to listen to to further refine if necessary.

Mixing the Kick Drum, and other Drums

Kick drums can vary from soft and pillowy to sharp and aggressive. Often times, the best sounds feature a low end energy, and then some sort of percussive attack. The top attack and bottom main kick energy can be a great place to start, but many times, we look at cutting the middle frequencies to reduce clutter in the mix. With the mid-range frequencies pulled out of the kick, the toms and snare (which also may be EQed accordingly, further down the line). While the first impulse may be to boost the crap out of the lows and jack the highs, a more refined approach is to test out a few microphones and determine which character suits the musical content, or sounds best for what you are going for, then apply light EQ and compression during tracking. Further EQ and compression is applied in the mixing stage as the character of the song begins to emerge stronger.

The snare drum may be eq’d to reduce the ringing resonance, or any bad tones that may be coming out too strong. While a great deal of care is taken to crafting original sounds, often times, samples that may be from the session, or from a different producer entirely can be overlayed or replace acoustic drum sounds. With EDM, Modern Metal, and Electronic styles gaining in popularity, sampled drum sounds have become the norm for many productions, that doesn’t mean that the snare you use won’t matter, because the overheads and action of the player greatly depends on the sound and tuning of the drum. We can supplement poor drum tones, or go with entirely different sounds than the ones recorded in post production.

Capturing the Sound of the Toms

Toms are most often gated to reduce ring. Try using a light expander or triggering samples if you want to explore cleaner styles. Editing out the toms is also a classic move, because, why have the mic track open if the tom only hits 4 times in the whole song right? Soloing the toms and checking for excess bleed or other problemes is a natural part of the mixing process. EQing out any boxy or taming or emphasising booming frequencies which may or may not be relevant to the character of the tone we are looking for is part of the process, as well as playing back all the other elements of the drums together, to check for balance between the different tracks.

Overheads control the cymbal and overall drum sound. Some engineers may start with overheads if they sound good and the drummer is well controlled within the room. The room tone is especially important to getting a good overhead sound, because really you are recording the drums in the room, not just the overhead sound. Getting a drummer who balances hitting the drums, with cymbal volume can be paramount to getting a proper drum sound. If you’ve got a real smasher, or someone who hits the snare really wimpy, you might have a problem balancing the toms and other elements in the mix. The closeness of the mics is important too. How close the mics are, dynamic mics in particular, the more bass heavy and  direct the sound is. Placing mics too far away or two close can interfere with the balance of the mix.

They can be close or far, room mics, add another wildcard element into the already chaotic world of drum recording setups. While sometimes, it’s wise to just mute a sloppy room mic, a “garage” element, or a quick room sound can be really cool for a surf or rock sound. Sometimes, room mics serve to balance out the whole sound of the drum kit, or provide light ambience to help sit the tracks in the mix better, you can experiment with XY stereo room setups, or spaced mono pair, or other bizarre setups to your heart’s content, get funky, and decide for yourself if you like that slap happy room sound that a room mic can add to the harmonics of the drum sound.

Bass Guitar is next, usually a dynamic mic is good on this, but we also usually take a direct or mostly direct signal as well. With mic on the bass cabinet, and a clean Direct Box or DI Box signal coming out of the amplifier or bass, we can combine clean and more textured sounds to fill out the low end.

Sometimes different characters of bass tones can really balance each other out. Try having a more attack heavy DI signal and blending with a microphone signal that is lower and rounder or vice versa. Re-amp, or use amp simulators on the DI signal to spice up or supplement a decent bass cabinet tone. Each can be EQed differently. For a cleaner tone, use the DI signal, if you want to get a solid mid range and nice round tone, try an Electro Voice RE-20 or Sennheiser MD-421 on bass. Some people are die-hard mic bass players, others might favor the DI. It’s always ok to have a backup, and learning what different stages of amplification do to the sound is useful to managing your tone.

Guitar is another one where you can really control the tone with the choice of microphone and amplifier. In general, DI guitar sounds like crap. Don’t get me wrong, i have heard a few decent Direct setups, but for the most part TUBES and a really nice cabinet have the most positive effect on guitar tones. Choosing a condenser or dynamic mic for this can be a creative choice, because each character can have a huge effect on the sharpness, or roundness of the tones.

Again the mic positioning and to a lesser extent, the room has an effect on guitars that have a mic relatively close. Using a room mic for guitar is also a cool way to add depth. Try 2 or more guitar mics and choose your favorite or combine all 7. I like SM-57 or C414 on guitar, but i’m open to other flavors like ribbons and all possibilities to get in the tone zone.

Synthesizers or Keyboards other Backing Parts

Synthesizers can be put through an Amp, but more likely than not, a stereo DI signal, or other stereo strategy can widen up keyboards and backing tracks. Group vocals and other wide parts should be recorded in stereo ideally, and spread apart. Doubling up your performance on a second track is also a great way to spread out the love, so the parts can be panned out in the mixing process to widen the track depth.

The vocal sound, and the vocals, as well as the lyrics are usually a central part of many songs. It’s usually important that the vocals say something intelligible

Delay and Time Based Effects

Of course too much effects can make the vocals completely unintelligible.

Vocals are usually recorded “dry” or without effects, with effects recorded separately, or added later with plugins

Doubling and other techniques can be used to thicken a chorus, or highlight an important part of a song. Try doubling a part and listening back to the single, vs the double and learn how subtle doubling can add a magical element to your recordings. Sometimes an ad lib track will be used in rap music, where the freestyle backing improvisation adds a background voice. Often, I like to use a walkie talkie type EQ effect on that one to give it a different tone.