Audio Recording and Mixing at My Studio Bad Racket in Cleveland 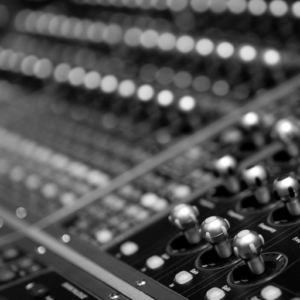 Sound or Audio recording in my studio is the capture of physical sound wave for example vocals instrumentals, or impact sounds from drums. Typically we record digitally with analog outboard gear, but tape is available for those that can afford it. I try to take a realistic approach to recording audio and taking into account the instrument and medium, and like the shifting electrical current of recordings, we can record anything from voice and rap and hip hop vocals, to guitar, bass and amplifiers, as well as sound generation from synthesisers or other electronic music instruments and pre recorded tracks. Electronically produced music is nearly impossible to avoid, unless only live acoustic instruments are utilized and no amplification or recording is necessary. Recording is inherently an electrical process, and therefore, a digital process. Trying to painstaking avoid all digital processing is almost impossible today. Even the lathes that cut the records are digitally controlled devices.

Using a PC or Mac computer, we capture the analog signal using digital sampling process. The sample rate is as high as 192khz in some cases, with a bit depth of typically 16, e4, and 32 bit. We use a Digital Audio WOrkstation or DAW to record on to an Apple Mac. We have all the latest plugins and digital emulators to emulate almost any analog device.

We use the best microphones form Neumann and AKG, as well as state of the art recording technology from Avis SSL and Neve. With the best microphones and a signal chain second to none, we have all the recording equipment, cables, and skills necessary to record almost any sound or audio source. We can plug into your output, or import tracks rendered at home or by another producer as well. We can easily export or import any number of audio files (mp3s are ok but WAV or AIFF is better!

Playback of audio and reviewing the takes is an essential step. We hit play and listen back to ensure quality. The mixing process is the creative touch that makes the sound better, and then we can export mixes aka bounces to generate mp3 or wav files that can be played on any normal computer phone, or burned to a CD etc.

Mixing or blending your audio together can be an enjoyable and profound way to improve your sound. By changing the voclem and adjusting the EQ and balance of the tracks, we can craft a polished finished product form a rough take.

The sound is mixed from our state of the art control room at Bad racket studios. We adjust plugin and outboard gear settings and change volume levels using dynamics control like compressors and limiters to play your audio back loud and proud, ready for audiences everywhere. With several types of speakers and headphones, our studio is the best place to record in near Cleveland.